The artistic tradition started in the Leu Family with Eva Aeppli ( Felix Leu’s mother ) who’s second husband was Jean Tinguely. Swiss artists they were part of the avant-garde art movement in the 50’s and 60’s in Paris where they lived in the quartier Impasse Ronsin, where they were friends with other artists Daniel Spoerri, Yves Klein and Niki de Saint-Phalle.

Miriam Tinguely is an artist and the daughter of Eva Aeppli with Jean Tinguely. She resides in Switzerland, her more recent works are a combination of drawing, watercolor, engraving, and collage.

Born in 1965, Jane Leu Rekas is Felix’s eldest child, she lives in Portland, Oregon. She works as a Transpersonal Therapist, and Certified Hypnotist, in private practice, in Hood River, Oregon. Jane has a B.A. ’87 in psychology from Reed College, and a Master’s in Social Work ’92 from Portland State University. A  Licensed Clinical Social Worker since 1997 Jane has 25 years experience as a mental health specialist.

In 1965 Jean Tinguely had a tour of exhibitions on the east coast of America, Felix Leu was his technical assistant, at a show in New York Felix met Loretta Buscaglia. As fellow artists and as a couple they went on to travel the world and raise a family of four children; Filip, Ama, Aia and Ajja. 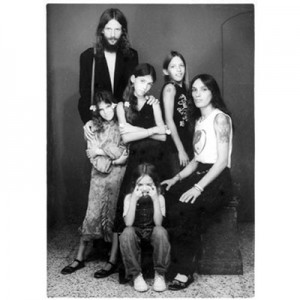 Their first child, Filip Leu was born in Paris in 1967. Felix and Loretta had taken up tattooing during their travels and Filip learned the technique. With them he started the Leu Family’s Family Iron Tattoo Studio in Lausanne, Switzerland in 1982. A tattooer and painter, known for his artistic spontaneity and blending of surrealism and psychedelia. He is a co-originator of the Art Fusion Experiment with his wife Titine K-Leu, known for her paintings of iconic tattooed people and sensual female forms.

Ama Leu is the eldest daughter of Felix and Loretta Leu, she grew up in the bohemian family environment and went on to become an international fashion model for 20 years.
Her clothing lines blend her knowledge and experience of art, tattoo and fashion. She also focuses on the use of eco friendly, organic material.

Aia Leu is a fine art painter who works in oil and watercolour. Aia’s work draws directly from her multicultural and bohemian upbringing, which saw her raised ‘on the road’, as her parents followed their dream of a life of ‘art and freedom’. Her work is particularly influenced by both her years spent as a child in India, and the richness of the Irish landscape, she has recently illustrated The Oracle of Change which reflects beautifully the diversity of her inspiration. She is married to Steve Allin, Steve studied Interior textiles and furnishing in the 70’s at the London College of Furniture in Commercial road. He is known for his involvement in Hemp construction internationally, developing and teaching in Haiti, Nepal, Costa Rica and other countries.

Ajja ( Ajja S.F. Leu ) channels his creativity through parallel careers as musician/producer/dj, and Peak Records label manager. His much appreciated solo live sets, fusing his twisted psy-experience with a love of funky grooves, have made him a fixture in major festivals and parties around the globe. Tanya Leu is married to Ajja, she creates intricate pen artworks under the name of Tanina Munchkina.

By continuing to use the site, you agree to the use of cookies. more information